The cultures of the world have chosen different ways to make spoken language visible and permanent. The original (1985) edition of Writing Systems represented the first time that modern linguistic principles were brought to bear on a study of this. It was translated into three foreign languages, and became a standard reference in sources ranging from the Encyclopaedia Britannica to the Unicode manual.

Now this new edition brings the story up to date. It incorporates topics which have emerged since the first edition (such as electronic techniques for encoding the world’s scripts), together with new findings about established topics, including the ultimate historical origin of our alphabet. As well as four more chapters than the original edition, it contains many more illustrations; half the literature citations are to items which have appeared since the first edition.

Featuring a series of detailed case studies of scripts of diverse types, and giving due attention to the psychology of reading and learning to read, the book is written so as to be accessible to those with no prior knowledge of writing systems other than our own.

The New Books Network has done an interview with me about the new edition – you can hear the interview as a podcast.

The book is available via this site with a 25 per cent discount. 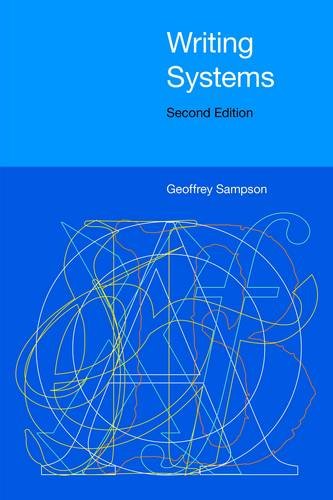 Some comments on the first edition:

Sampson is such a clear writer and excellent teacher … If you have an interest in language and languages for personal or professional reasons, this book will greatly enrich your life.
— C. Jannuzi (Japan), in Amazon reader reviews
the best linguistic introduction to the study of writing systems now available
— Language
This is a splendid book ... of outstanding interest to professional linguists and students of linguistics, and also to the large number of lay readers who are fascinated by facts about human language
— British Book News
a refreshing and rigorous contemporary scientific examination of writing ... Linguists on all fronts should welcome this
— Choice
an incredible tour de force, covering both Western and East Asian scripts, their historical development and their linguistic features. The treatment of Chinese, Japanese and Korean scripts is particularly fascinating for a Western reader ...
— ASI Newsletter
I have found Sampson’s book invaluable as a source of descriptive information ... it is written in a straightforward and approachable manner which makes it very engaging as general reading matter ... shows an acquaintance with recent psychological work that is seldom to be found in linguistic writing.
— Leslie Henderson, in Quarterly Journal of Experimental Psychology
This, years ago, was just about the first book I read on a linguistic topic, and it’s still my favorite … totally accessible to non-linguists.
— Sean Burke (Alaska), in Amazon reader reviews
Geoffrey Sampson is an outstanding authority in the fields of general linguistics, the study of Oriental languages, and of writing systems. His deep and solid knowledge of numerous languages and the rigour of his theoretical-linguistic arguments combine in this book with rare gifts of exposition to give us a work which, while meeting the requirements of scientific writing, is nevertheless accessible to a wide range of readers.
— translated from a Spanish-language review by Lorenzo Peña (Spanish National Research Council), in Arbor
Particularly liked the argument made against English spelling reform
— “Walrus”, on Goodreads


From reviews of the new edition:

the original [was] immensely readable … the second edition [should be] even more accessible … Sampson is assiduous in relying on scientific evidence wherever possible … This book remains one of the most interesting, useful and balanced works on the typology, history and psychology of written language, and the revisions made for the second edition bring it nicely up to date …
— Lynne Cahill, in Journal of Linguistics
readable … clearly written … a pleasure to read … Even those with no linguistic background could benefit …
— Michael Cahill, on the Linguist List
Really great description of the evolution and structure of the world’s writing systems!
— “Gadget Wallah”, in Amazon reader reviews
This is One not to Miss for True Language Lovers … The section o[n] Chinese was nothing short of mind-blowing … if you have a serious interest in language this is one book you really shouldn’t miss. There just isn’t anything else out there like it.
— “Nathan B”, in Amazon reader reviews

Paper copies available via relevant British or American Amazon pages, or see above for discount. For the e-book, follow the link from its ISBN, above.