Over the last forty-odd years, it has become fashionable to believe that human beings are born with detailed knowledge “hard wired” in their genes.

In particular, children are said to be quick at language-learning because they inherit a special language instinct which gives them most of what they need to know before they start. This idea was first argued by Noam Chomsky in the 1960s and 1970s; it has been popularized by Steven Pinker’s best-seller The Language Instinct.

My book assesses the many arguments used to justify the language-instinct claim, and it shows that every one of those arguments is wrong. Either the logic is fallacious, or the factual data are incorrect (or, sometimes, both). The evidence points the other way. Children are good at learning languages, because people are good at learning anything that life throws at us — not because we have fixed structures of knowledge built-in.

A new chapter in this edition analyses a database of English as actually used by a cross-section of the population in everyday conversation. The patterns of real-life usage contradict the claims made by believers in a “language instinct”.

The new edition includes many further changes and additions, responding to critics and taking account of recent research. It has a preface by Paul M. Postal of New York University.

The ‘Language Instinct’ Debate ends by posing the question “How could such poor arguments have passed muster for so long?” 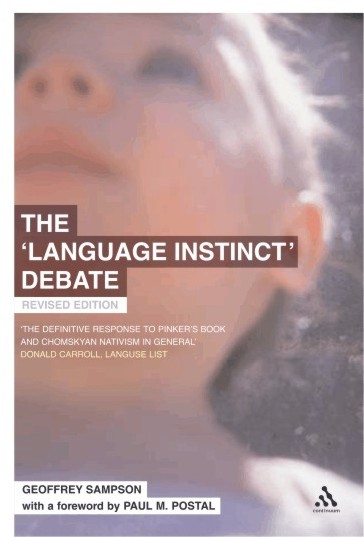 the definitive response to Pinker’s book and Chomskyan nativism in general — a wonderful book ... should be required reading in a varied range of courses
— Donald Carroll, on the Languse list (Temple University)
Well-argued. Sampson makes Chomsky’s (and Pinker’s) arguments for linguistic nativism seem pretty sophomoric.
— Mark Tursi (New Jersey City University), on Goodreads
makes a powerful case that linguistic nativism … risks looking to scientists in a hundred years like the search for phlogiston does to us now.   … claims that linguistic nativism is less a theory than a cult start looking plausible.
— John McWhorter, in Language
I liked this book for the simple matter of fact that somebody is finally addressing the shortcomings of the innate language theory.
— Begüm Saçak, on Goodreads
a detailed, well-argued criticism of the nativist approach
— Shuly Wintner, Alon Lavie, and Brian MacWhinney, in Springer Lecture Notes in Computer Science
a devastating critique of Steven Pinker’s Language Instinct … It’s written in a style that’s just as accessible as The Language Instinct – so if you’ve read The Language Instinct, this is for you!
— “Cath”, on Goodreads
an impressive tour de force ... it does read very fluently and entertainingly ... many, if not all, of Sampson’s criticisms ... are persuasive
— James Hurford, in Journal of Linguistics
Sampson demolishes most of the arguments nativists like Chomsky, Jackendoff, Bickerton and Pinker use …
— “Guillermo”, on Goodreads
comprehensive, exhaustive, the product of ample research ... a most interesting and instructive book which I recommend to all linguists
— Ernst Pulgram, in Language
In his wonderful book … Geoffrey Sampson uses textual evidence from corpora very effectively to counter [Chomsky’s] argument for innateness.
— David Hoover, in Digital Humanities Quarterly
[a] devastating rebuttal of the linguistic theories of “nativism” in Stephen Pinker
— Deirdre McCloskey, in European Review of Economic History
I read Pinker’s book but it left me uncomfortable … Sampson’s book was a refreshing “Occam’s Razor” and I finished it feeling much more convinced of his side of the argument. It simply doesn’t rely as much on assumption and scientific legerdemain.
— T. Smith (San Francisco), in Amazon customer reviews
… remarkable for its lucidity and readability in a field not notable for these virtues … Sampson may not bring down the temple of a false god but he has most certainly shaken the pillars. Anyone interested in language and culture will find the book captivating.
— Leonard Ashley, in Geolinguistics
… I feel … inspired by [Sampson’s] conclusion that our minds (as distinct from the matter of our brains) are endlessly innovative …
— “Nicole”, on Goodreads


The ‘Language Instinct’ Debate is published by Continuum, now an imprint of Bloomsbury Publishing of London, New Delhi, New York, and Sydney. New or used copies available via relevant British or American