The famous American intellectual Noam Chomsky is known for two sorts of activity: pronouncements about politics and current affairs from a radical-Left perspective, and academic linguistics, a discipline which he is widely seen as having created in its modern form. He has commonly treated these two aspects of his life as separate and unconnected, and deprecated suggestions by others that there might be links between them.

This book shows that there are in fact strong though un-obvious links between Chomsky’s view of the nature of language and his politics; the two sides of Chomsky’s activity are different aspects of a single pattern of ideas. Both Chomsky’s linguistics, and his politics, are as misguided as one another, and for the same reason in both cases. 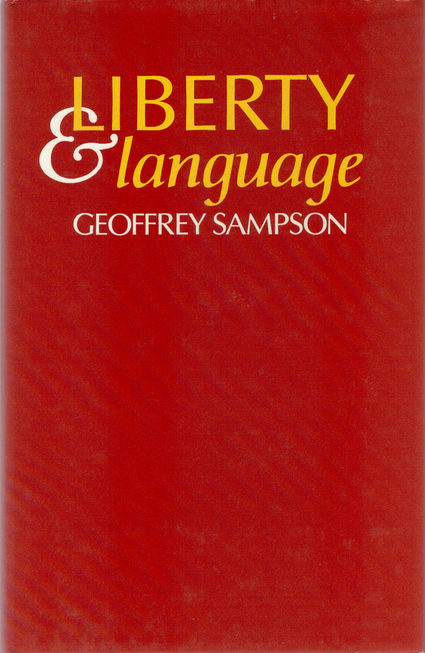 Sampson’s book can be recommended as one which deals with important issues in a refreshingly jargon-free manner.
— Vernon Bogdanor in Crossbow
Laymen will find in it a lucid exposition of ideas about language and human thought and action that deserve the attention of any intelligent person, while professionals can expect to derive much stimulation and many novel insights into current controversies. Language and Liberty combines subtle philosophical analysis with perceptive commentary on vital political issues
— James McCawley in Language
Sampson’s book is written with great verve … All but the most pious must enjoy the cheek with which he sets about the very marked vein of glazed self-righteousness in Chomsky’s performance as a social prophet.
— Anthony Quinton (Lord Quinton) in the New Statesman
Publication of this book is welcome for its justifiable criticisms of Chomsky, for its fluent statement of an unfashionable view, and above all for its passionate defence of free thought.
— The Times Higher
Shortly after last year’s General Election, Keith Joseph issued his senior civil servants with a reading list, including such golden oldies as Adam Smith’s The Wealth of Nations, and Joseph Schumpeter’s Capitalism, Socialism and Democracy. He would do well to add this recent book by Geoffrey Sampson.
— Radical Philosophy
contains some very interesting and original ideas on the nature of rationalism and empiricism and the question of innate ideas … a valuable contribution to the literature of liberty
— Reason